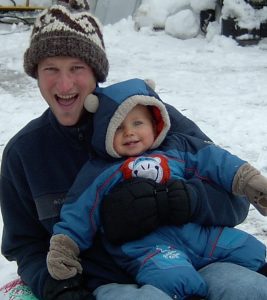 Many parents wonder if there’s anything they can do to prevent their children from turning out gay. That’s a legitimate concern since approximately 50% of our behaviors are biologically based, and the other 50% or so are environmentally based. And that’s where parenting comes in. So if you suspect that your child may have gay leanings, the very best thing you can do for your child is to love your child and demonstrate that love.

Anything that strengthens your child’s sense of self and his character will help him to deal with same-sex attraction, if that should be his leaning.  Tell your child that s/he is valued and loved. You are in the place of God to your child, and your child will learn from you what God is like.  As an adult, your child will still likely see God as being much like you.

Even teenagers and adults are deeply affected by the attitude of their parents. Love and caring demonstrated to adult children will strengthen them to make difficult choices. And it will make it much easier for them to believe that God loves them too.

When I shared your message (Is my child gay?) on our support list for Christian gay people, here’s what Jenny wrote:

When I was growing up, I loved to play baseball, football, hockey, and anything rough and tumble with my three older brothers. I much preferred playing sports and games with the boys my age. At first they didn’t want to play with me since I was a girl. But when they learned I could throw a ball just as far as them, or catch a football and outrun some of the boys, I was somewhat accepted. My female friends weren’t really friends, as they kind of accepted me, but not as a close friend. I had dolls, and would sew little dresses and play with them only when my mom had time to play with me. I did not enjoy doing the “feminine” things around the house, but I acted like I did, because I received my mothers approval …. but I did not understand that aspect until I was older. I wanted her to play ball with me, but she would frown and say “That is for boys.” So I tried to not play with the boys in the neighborhood, if I could get mom to spend time with me, even tho it meant doing “girly” things.

So fast forward a few years, and I finished getting my degrees in college, and finally accepted that I was different. I was attracted to other females. It was devastating to me, because I wanted to be “normal” and marry …. have kids and live happily ever after.

After working a couple years, I felt that if I immersed myself in the Word of God and was surrounded by Christians, maybe I would change. I was desperate to be “normal.” So I felt the calling to teach at a Christian university and went with the attitude that I could and would change. But alas ….. I befriended an outcast who worked at the hospital where I had my students doing their OB-GYN rotation in nursing. The outcast was suicidal, and very depressed, and I reached out to her, and we became friends. And before I knew it, we were also lovers.

I quit teaching and went back home with such horrible guilt. And my mother went through some of my stuff and found a love letter. World War III was started. I tried to convince her I was no longer active in a lesbian lifestyle, but she did not believe me. Then my worst fears became a realization …. mother telling me she wished she had never had me …. wished she had went through having an abortion when she became pregnant with me …. she was no longer my mother ….. and the rest of the family felt the same way. She told me to leave and never look back.  Never call. Never see my family again.

After hearing this for 3 months, I realized she was serious …. so I went back to the gal I had seen in Arkansas, and we moved to Portland, Oregon. I quit going to church, because I felt that if my own mother rejected me, then why would God love and accept me … a lesbian.

So dear mother of a child who may be attracted to the same sex, please love and accept him ….. no matter what. It took me years to get back to living a celibate Christian lifestyle, and it would have been easier if I could have had my mother’s and father’s love. And it is the support of my Christian friends that helps to keep me celibate.

Please love your son without any reservation.

So, according to Jenny, love makes a great deal of difference even later in life, providing strength for difficult choices. And in early life, it shapes the personality and character. So, yes, “please love your son without any reservation.”